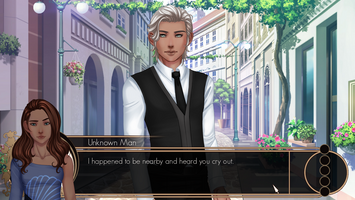 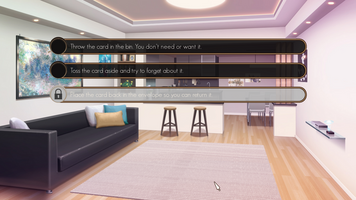 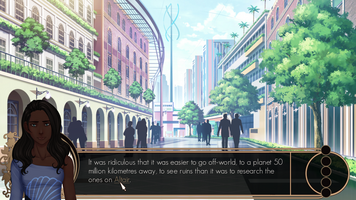 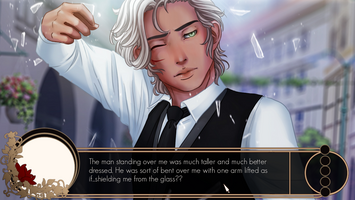 Hi everyone! The demo for Gilded Shadows is now up and available for download.

You can meet up to three love interests in this part of the demo, as well as being introduced to the main character and some of the world building.  This is essentially the first chapter of the game, which takes place entirely on the day side of the planet.

We are planning for future expansions to this demo, probably going up to the end of chapter three, so this is just the first part. There is no ETA on the release of demo expansions.

We will be making a thread for bug reports as well!

Thank you all and we hope you enjoy the demo for Gilded Shadows!

A cyberpunk and solarpunk adventure-romance that explores a world where one side is forever day and the other, night.

I LOVE THIS GAME. It is so amazing, I love how intricate the backgrounds are and the lovely CGs and the characters are so interesting. I want mooooore.

I throughly enjoyed playing Changeling and I am so excited for Gilded Shadows . I love the little snippet we get with the demo, truly has me wanting more. I can't wait to meet the other three love interests. Keep up the amazing work!

Thank you so much! I can't wait to introduce the others - though I can say that one LI definitely won't be introduced in the demo, unfortunately. I'm trying to see if I can work the remaining two in (even if they only get a cameo).

Because of their positions, it's hard to get them into a place story-wise, that the player can really interact with them. That was one reason we made profiles accessible from the start. OwO

I found a huge glitch. It happens right after you meet one of the guys and they walk you home and the game just suddenly ends. Anyway, jokes aside, can't wait for when the rest of it is finished. Thanks!

I'm glad you liked it! Thank you!! <3 I'm not sure when the next part of the will come out, but I hope you enjoy it when it does!

I will be anxiously awaiting for when more of the story is ready! Thank you very much!

AHHHH! I was on vacation when the demo went live, so I couldn't play it until I got home with a desktop (which I did pretty much as soon as I got home) and OMG I wish this was the whole game and not just a demo because I was IMMERSED and then it ENDED. AHHH!!!

Okay, enough of that. First, lovely artwork and I like the customization options for the MC. It makes me want to do multiple replays with different combinations, just to see how the other characters react. I also liked how three different options gave you different encounters and different feel for the world while still getting across the same essential information. Each time felt like I was uncovering a different aspect of the story without feeling like I was missing something important.

Also a nice touch is the "alignment" indicator that popped up after you make a choice at the "inciting incident" at the fountain. That was a nice touch and I like that I shows which faction you are leaning towards encountering first.

I love world-building glossaries, but am very happy about the "spoiler alert" at the top as well. Most of the stuff was pretty self-explanatory within the context of the dialog/narration, so the glossary items feel more like extra tidbits for uber-readers rather than necessary to understand what's going on. Plus, I feel like it will be a good refresher later in the game if you've been playing for a few hours and someone references something and you're like, "Wait, what was that thing again? Oh yeah!" And since the characters have those nano-bots connecting them to their version of the Cloud or World Wide Web, being able to jump into the glossary doesn't seem out of place at all!

Music! Love the piano work and the shifting tones with the MC's mood and surroundings.

The only "bug" I ran into so far is that at one point, Caleb's name pops up before he officially introduces himself to the MC. Another minor thing: felt like in the very beginning there was a slide or two too many describing how the MC felt sick. Had a tiny flicker of annoyance at the over-use of description, but quickly moved past it, so just an FYI to maybe cut or condense that just a tad because we definitely got the message that what just happened was unpleasant!

So looking forward to more! You folks rock!

I'm glad people noticed the indicator - it flashes pretty fast, but I thought it might be helpful to have it through the common route so you can kind of get a feel for where you might be heading.

And yes! The glossary should be more of a supplementary thing that helps give more info on things that aren't fully explained in the text. There's a lot of world building to get through and having the glossary helped relieve some of the pressure of trying to explain it all. If something DOES confuse people, they can look at the entries. And if they don't need it, they can just ignore the links entirely.

We're aware of the name issue, but thank you for mentioning! I'm not sure if we'll push an update just to fix that one thing but it's definitely fixed so that'll be reflected the next time we do update!

Regarding the short beginning scene, we'll have a look at it. It was trimmed down from a much longer scene, so it may still need smoothing out. Thank you for the feedback! OwO