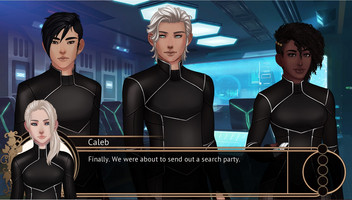 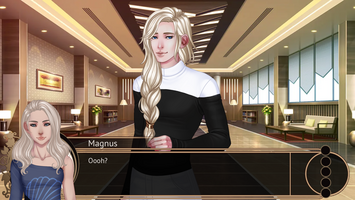 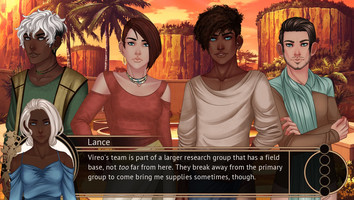 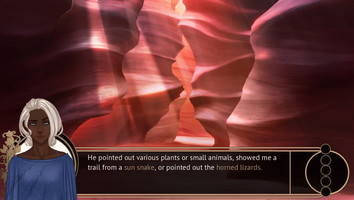 It's been a while since I posted a proper devlog here on Itch.io (if you want more frequent updates, please follow on tumblr, where I post every two - three weeks).

It can be tiring to keep so many places updated so I don't update here frequently. I did want to give a brief update here for anyone who doesn't check our official development blog.

Gilded Shadows is currently around 99% complete.

All the content for the base game* is complete (with the exception of a few mini-CGs that were only recently added to the project.) This includes all the writing and CGs as well as glossary content and the like.

We are currently in the process of testing the project to make sure all glossary hyperlinks work, that as many typos as possible are eradicated, and the like. As well as putting together an extensive and detailed content guide for everyone who wants something more detailed than a general list.

With a game this large, testing everything just takes time. There are a lot of words to read through.

As of right now, the testing is around 3/4 of the way complete for this current round. There will likely be another lightning round of polish-testing to catch any lingering issues. However, that's really all that's left to be done.

I am currently considering the possibility of releasing an updated version of the demo. It will NOT have any significant amount of new content. There have been minor edits to some scenes for continuity, but there will not be any major additions or new chapters. It will be an update only, not an expansion.

The main reason is because some world building and lore changes have made glossary articles or profiles in the current demo at odds with the final game lore. It would be nice to pull everything into alignment.

I don't know if or when this might happen but it's something on the "to do" list.

If you are interested in joining the Steamberry Discord server, here is a link to do so:

Anyway, that's all for now. I know there are occasionally threads asking whether this project is still in development. The answer is yes. I work on it daily during the work week and sometimes on the weekends. It is very much alive and well. Just a slow process.

That's all for now!

*the base game is considered the original six love interests. This doesn't include the three kickstarter LIs that were added as stretch goals and tier goals.

A cyberpunk and solarpunk adventure-romance that explores a world where one side is forever day and the other, night.

I love everything about the demo. From choosing how your character looks and behaves to how the love interests look and act. Great game in the making, can't wait to see it!

Thank you so much! We are slowly working on getting the game ready for release in the next few weeks! So we are incredibly close!

ive been looking forward to this game so much since i finished changeling!! can't wait :)

I've been looking forward to this game so much!  Woo!  *applauds excitedly*

Starting on the final LI route for playtesting today! Can't wait to hear all of Maggie's snark in the robot's voice! LoL 🤣

Woah almost finished already? Where did the time go? I just seems like  last year that I finished helping you test Changeling.

I'm definitely going to check this one out when its done~

Hahaha. Yeah, if I tell you beta testing for Changeling was over three years ago, it'll blow your mind. It freaks me out when I think about it! LoL Can't believe it has been that long.

I already follow your updates on tumblr, but I just came here to say how exciting it is to see the game is so close to completion! Following the development so closely has been so inspiring for me, and you have all my respect for the amount of work it involves. *Insert "You're doing amazing sweetie" meme here*

Take your time, and good luck with the finishing touches! I'll come scream here when the release date is set in stone, no matter when it is :D

It's at this really frustrating stage where all the main stuff is done and it's just clean up and polishing. And it's so tempting to rush it all so I can just release it. But I have to force myself to take it slow and give it all a proper test and polish so it's as good as it can be. ;A; It feels a little like being in limbo but I'm hoping to be moving into the final final stages soon!

I can't wait to play this game. You do amazing work and i really appreciate the talent involved in making these games!

Thank you! I hope it lives up to your expectations when you finally get to check it out!

I've been following all the updates on your Tumblr, but I love the itch.io updates. I just finished playing through Changeling (for the nth time), so I can't wait to delve into Gilded Shadows. You have my endless support!

Maintaining an update schedule across so many sites is so tiring but I decided it was TIME to post here. It's been a while. LoL!

I usually just point people to tumblr since I've been maintaining that dev blog for...6 years or so? Since Changeling started, really. But it's good to post here sometimes too. LoL

I'm seriously looking forward to FINALLY being able to share GS....*soon* - it's been a long journey but I still really love this project and I hope everyone else loves it as much when I am finally able to release it. 😌😌

So looking forward to playing the completed game! :D

I'm looking forward to releasing it! 🤣